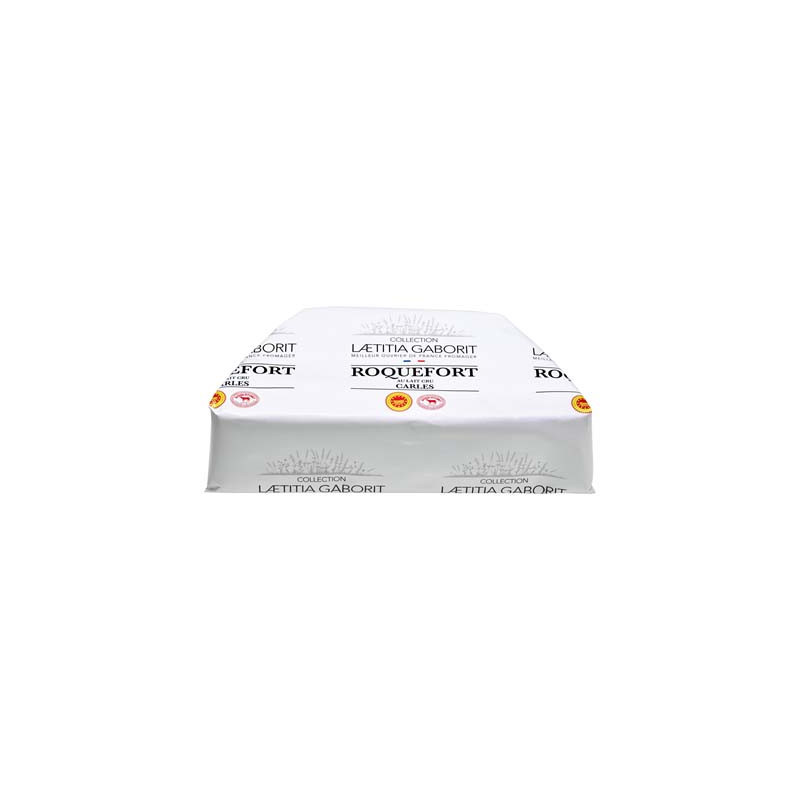 Origin of the Product: In 1925, Roquefort received the first cheese AOC (AOP in 1996). In the 15th century, King Charles granted the ripening monopoly to the village of Roquefort-sur-Soulzon and made the Roquefort AOP cellars a protected place. Located in the heart of the Combalou plateau (630 meters above sea level), their faults called fleurines provide natural ventilation which allows the proper development of Penicillium Roqueforti. Roquefort AOP is produced in Aveyron from raw milk from the Lacaune sheep breed only.

History of the producer: In line with a secular and family tradition, Delphine Carles is the third generation at the head of the Carles cheese dairy. It has the title of "Master Craftsman" which makes Roquefort Carles the only Roquefort "artisan". The cellars are located on the scree of Combalou. The milk comes from 17 carefully selected producers of 100% Lacaune sheep. The Roquefort AOP Carles has an ivory-colored body that is adorned with a uniform marbling from the heart to the heel, from blue-green tones to dark greens guaranteeing its typicity. It has a lovely, pronounced and characteristic mold smell.

Selection of Laëtitia: The selection of Carles made on penicillium forms the character and smoothness of this cheese. Its marked taste brings out all the virtues of a noble cheese. For me, it is the "real Roquefort" made in an artisanal way. Delphine has managed to keep this tradition, whether for the selection of producers, animals, manufacture and refining. Their values ​​are in line with my approach.